The name of a person is a central concept in genealogy. In Gramps, you can enter name information in the Person Edit Dialog and from the Names tab or the Edit icon at the top of this dialog, you can jump to the Name Edit Dialog. 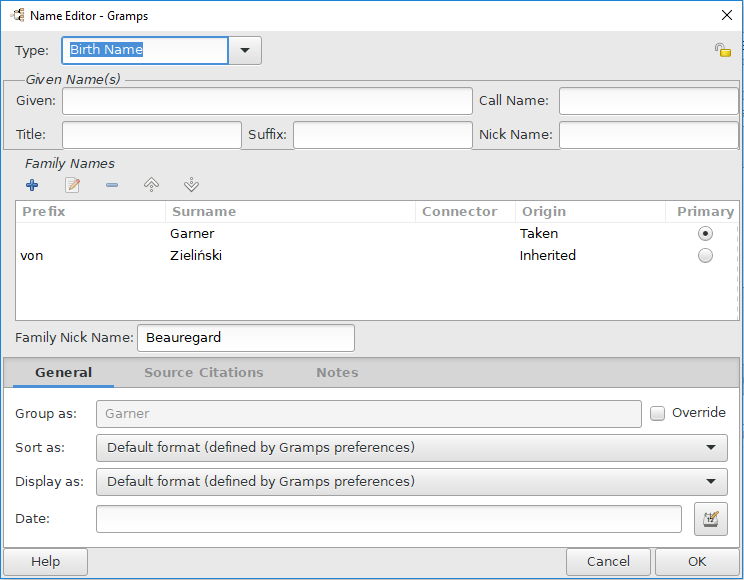 A name is likely to be derived of a certain Type or grouping. Some types of names are predefined:

As with most Type pop-up menus in Gramps, one can add custom name types. As an example from some cultures, a new name is adopted after (adult) baptizing. If that situation presents commonly, one could just type in a new custom label to add 'Baptized name' (aka Baptismal, Christened or Confirmation name) in the name Type menu. From then onward, that label will be selectable in the name type for that family tree.

A name entered as an Also Known As type is frequently annotated with the aka acronym (the typographical convention preferred to a.k.a. or AKA by the Associated Press or the Merriam-Webster and Oxford English Dictionaries) in genealogical Sources. Some people have a preference for using that or 'Alias' instead of the longer 'Also Known As' form. Other people would rather see the 'a.k.a.', 'a/k/a', or 'AKA' typographically in reports which also print a label with the name Type.

There are several types that have been proposed for the built-in list of name types over the years: derogatory, pejorative, clerical error, sic (for the Latin annotation sic erat scriptum meaning thus was it written), typo, reversed/inverted/jumbled, patron name (for cultures prepending a Patron Saint's name), pen name, stage name, or professional name.

But it has seemed reasonable to keep the standard built-in list terse and compact. This makes a more less confusing menu... without unfamiliar and seldom used groupings to be learned. It also makes exploring a sequence of name Type filters less involved. You can add custom entries for the just the types that will be meaningful when filtering names in your Tree.

Names in a Name Type

The family name is the part of the name which, according to law or custom, is passed from parents to child. Gramps defaults to the patronymic option, labeled Father's surname, in the Display tab of the Preferences for Surname guessing.

In the People category view, people are sorted based on this family name. In the case of cultures which do not use family names, one can use the grouping feature in the Name editor to design a name under which to group people from the same family.

Some Prefixes can indicate that the surname is actually the Place from which a person (or family) originated or even directional proximity to such a place. It can denote royalty or nobility of the surname. It can mean 'child of' and indicate their gender. Other prefixes can denote the leader of an extended family or holding a superior position.

The given name is the part of the name of a person which is chosen freely by the parents. Although the parents may feel constrained by regional or ethnic traditions to follow namesake conventions.

The Call name feature is inspired by the German word Rufname -- a compound of the words "anruf name" which literally translates to "Call name." And there is a similar Swedish structured concept known as tilltalsnamn -- a compound form of "tilltals namn" translating to "heard name." However, Gramps originated as an English product where there is no directly comparable analogue to this "Call Name." That makes the "Call Name" both a source of confusion to that community and harder to describe in English.

It does not fall into the more universal concept of a nickname, nor is it necessarily the familiar name by which a person is most commonly referred by their closest associates. However, it is the part (or parts) of the Given Name by which the person is the officially identified. And, if the nickname is keyed off a formal name, the Call Name is the key to the name.

Among the formal forenames given at birth, some cultures pick out a particular one to use for official and normal public use: the Call Name. (Think of it as analogous to the ancient idea that a person's public name is not his 'real' secret name, knowledge of which would give power over him to others). One of the formal given birth forenames is taken (typically *not* the first) as the Call Name. In Germany, this official name is frequently underlined in official documents. The concept is common in Northern Europe; the first name is often a saint's name or that of an honoured relative; or the first name may be the 'spiritual' name, while the call name is a secular one. There are contrasting views on whether a shortened form of a person's name can also be a call name; some consider that to be a nickname; as an additional complication, for example in Sweden, the (official) call name may be a name that is different from any of the forenames given at birth.

An optional attribute (characteristic) identifying how a name was culturally derived for a Person. The most commonly used Origin should be considered when making a Surname Guessing choice in the Display tab of Preferences.

Custom Origins may be typed in at any time. Pre-defined items of the origin selection menu include:

Furthermore, one can add extra names in the names tab of this editor. To switch a new name to be the standard name, one needs to use the context menu (right click on the name), and select 'Save as default name.'